In part one of this three-part series, we discuss international students' desire to attend Ivy League institutions and the chances they have of admission.

So you want to attend an Ivy League school…

First, make sure this is something you really want. Many students say they want to go to Harvard University—and why not? It’s a world-renowned school. But the better question is: Why do you want admission to the Ivy League in general, and are you willing to work for it?

There are many reasons why you may wish to come to the United States to study. Perhaps your motivation is intellectual, and you’re seeking the best education you can find. The US has most of the world’s highest-ranked universities—the Ivy League included—and your desire for knowledge would be met. Perhaps you’re seeking the best networking options in the world. The Tier 1 US schools are attended by the children of presidents, future CEOs, and the progeny of billionaires. There could be no better networking option on Earth than admission to an Ivy League school. Or maybe you’re driven by career success and looking to land an elite finance job or entrance to elite medical or law schools. The Ivy League funnels graduates into all of these fields, and your chances of achieving these goals will improve with admission.

Whatever your reason for seeking Ivy League admission, your motivation should be real and your work ethic has to be fierce because the odds are daunting—and the path to admission is lined with an arcane application process. The process of applying to university is confusing and stressful even for domestic students—for international students, it’s doubly so. Not only may the requirements and time frame be different from what’s typical in your home country, but US schools may value and look for qualities in prospective students that universities in your homeland don’t.

Related: 4 Myths About the Ivy League and Selective Colleges

The difficulty level of getting into the Ivy League

Admission rates for international students getting into the Ivies 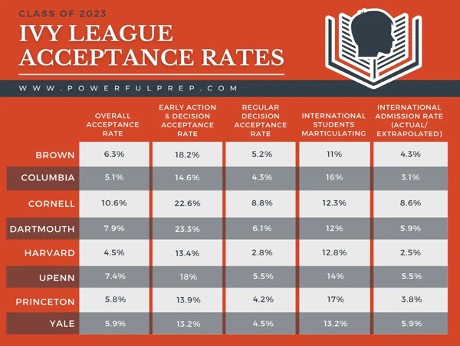 Please note: At the time of this article, admission statistics for the Class of 2024 were not completely released, and Cornell University had withheld admission statistics relating to overall and Regular Decision acceptance rates for the Class of 2024. Brown University’s reported data here was calculated using overall acceptance [total applicants] international student percentage/international student applicants. The last year Princeton provided data was 2006, when the international admission rate was 6.3% (4% lower than overall admission). The University of Pennsylvania reported in 2019, and information is approximated based on 2% lower than overall admission.

This 5% average acceptance rate ranges from our estimated 2.5% at Harvard to 8.6% at Cornell. While that might sound undaunting—at worst, one out of 40 odds—it’s actually very difficult given that only the absolute best of the best are in that applicant pool. While American students are competing against the best students from other high schools in the US, international students would be competing against the best students from other countries.

You’re here because you want to become part of the select few who open an acceptance letter to an Ivy League university. The first step to being a successful international applicant is to begin thinking about the necessary requirements for applying and the narrative your academics and extracurriculars will paint of you as soon as possible. Stay tuned for part two of our series on international students and the Ivy League to learn how to begin planning and organizing a timeline and preparing your best application possible.

We have a ton of advice on CollegeXpress for students from other countries looking to attend university in the US in our International Students section. Check it out!

Back to School Scholarship Winner, High School Class of 2023

I’d like to thank everyone on the CollegeXpress team for their generosity. Not only have I been awarded this scholarship, but CollegeXpress makes it easier to apply and gives amazing tips for schools and scholarships. I am extremely grateful as this will help with my schooling and allow me to be able to enter into the field I’ve been dreaming of all my life.

CollegeXpress has helped me find so many scholarships that fit me. They match me to colleges I have specific interest in to make searching for colleges way easier and more efficient. CollegeXpress refers me to schools that have my major of interest and backup schools if I want to change my mind. CollegeXpress also gives out their own scholarships, so you have even more of a chance at gaining multiple scholarships. This website has helped me de-stress from the pressure of not being able to afford college, [of finding] what schools are right for me, and how to find easy access to scholarships that most people never knew existed.

CollegeXpress has been an instrumental resource for my scholarship search and has given me the opportunity to try my best so I can graduate from college debt-free.

Scholarship for Students of Color Winner, Class of 2022

CollegeXpress is a great application that helped me search for many different scholarships, and it narrows the scholarships depending on how you set your profile. Not only that, but it helps you choose different colleges to apply to by finding matches through the description of your profile. It was the best experience for me.