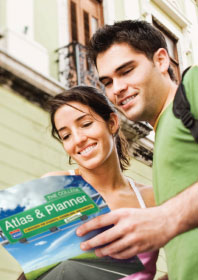 The best way to learn about life in the States as an international student is to experience it firsthand, but to give you an idea of what you might encounter throughout the country, we've put together a little breakdown of the geographic regions and some of things they're known for.

Just like countries that share borders retain unique cultures, just like the northern tip of a country might have wholly different cuisine from the south, if geography has taught us anything, it’s that proximity does not equal homogeneity!

In turn, the United States is far from a uniform collection of states, with unique traditions, wildly differing landscapes, and even distinctive dialects. The state of Maine, the United States’ most northeastern tip, is roughly 3,000 miles from Southern California—it’s practically a world away! Even California alone presents vastly differing terrain and culture from top to bottom, and it should—the state is around 900 miles long.

Once you arrive at university in the United States, you may also want to take advantage of travel within its borders. Take a bus or train to a nearby state on a weekend holiday, or just visit local neighborhoods if you can. Be sure to have your passport and visa with you when you travel; there aren’t security checkpoints between states, but you may need identification to purchase ground tickets, and you will definitely need travel documents to get through airport security, even if you’re flying within the country. Plus, in the event of an emergency, it’s good to be prepared either way!

Of course, the best way to learn about life in the States as an international student is to experience it firsthand, but to give you an idea of what you might encounter throughout the country, we’ve put together a little breakdown of the geographic regions and some of things they’re known for.

In the United States, the West, in many ways, still represents that romanticized uncharted territory of the “Old West,” the days of the American cowboy. From the Great Plains that roll through the centermost states to the towering Rocky Mountains, it’s a land of rugged beauty that’s tempered by the California coast, with its Hollywood glamour and laid-back beach culture. If you have an adventuresome spirit, a university in the West might just call to you too!

Perhaps the most diverse swath of land geographically—in part because it’s also the largest—the American West has it all: snow-capped mountains, deserts steeped in sunset colors, and majestic Redwood forests. The temperature is generally semiarid, and many cities see over 300 days of sunshine per year! However, the West also features areas of high rain and snowfall, such as the Upper Northwest territory (rain) and states along the Rocky Mountain range like Colorado (snow). The Rockies themselves are quite formidable, and they completely divide the country, stretching from Alaska through Canada to Mexico.

Temperatures are often very high—sometimes over 40 degrees Celsius—during the summer months in the southernmost states, which include Nevada, Arizona, and New Mexico. With the exception of higher elevation areas, northern states are quite temperate. In addition to the West Coast, bordering the Pacific Ocean, western states feature many lakes and rivers. Finally, the West’s outliers, Hawaii and Alaska, are both beautiful states as well, one a lush tropical island, the other, a breathtaking, snowy wilderness.

Asian and Pacific Rim influences are particularly strong in coastal California, as are Mexican influences in the southwest. The Pacific Northwest is known for its eclectic culture and cuisine, taking advantage of bountiful seafood offerings like salmon and even the geoduck, a giant mollusk. States closer to the Great Plains still retain the influence of bygone cowboy culture, including its rustic food, and ranching makes beef, pork, and lamb an important part of their meals. Finally, the West boasts a robust wine industry, even beyond California’s famed Napa Valley, as the industry spreads further north and inland.

The American Midwest is often referred to as the Heartland, and, indeed, it is a land with a lot of heart. These central states are full of rippling fields of grain and generations of farmers. They are steeped in the history of the Great Plains Native American tribes and years of westward migration. Now, many of the Midwest’s larger cities are rising in prominence, as places like Omaha, Milwaukee, and Minneapolis have shown stable economic growth and a high quality of living, attracting many newcomers to settle in these burgeoning areas once again.

Though there are some mountainous regions around its borders, the middle of the United States is primarily composed of large expanses of gently rolling hills and flat land, with relatively low-lying vegetation, making rural areas ideal for raising livestock and produce. It’s a land of prairies, tall grasses, and comparatively low rainfall and temperatures that fluctuate wildly between the seasons. Northern regions see significant snowfall. Midwestern states are also striped with the country’s largest rivers, including the Mississippi and Missouri. Some central states, particularly those with open plains such as Kansas and Iowa, may also experience tornados during certain times of the year.

The Midwest is home to both stereotypical, hearty “American” fare as well as dishes heavily influenced by the many European immigrants that populated the region. It’s known as America’s breadbasket because wheat and other grains are grown there, along with corn, soybeans, and even wild rice. It’s also a land of meat and dairy production, and beef, pork, and milk products are very popular items. The phrase “American as apple pie” can truly be lived in the Midwest, given the area’s apple production, among many other cold-weather fruits. Seafood is less popular, given the distance from either coast, though saltwater fish is shipped to the area and freshwater fish can certainly be found. Regions are also known for certain specialties, like deep-dish pizza in Chicago, Kansas City barbeque, and Wisconsin cheddar cheese.

Sprawling and genteel, the South is a beautiful, historic, and welcoming collection of states. It’s also an area with remarkably diverse climate, topography, and culture between each state. Southerners are known for their hospitality, and the reputation is well founded. Should you find yourself in a university in the South, you are sure to feel that welcome as well.

Ranging from temperate Mid-Atlantic States to humid semi-tropical and even tropical areas at the southernmost tip of Florida, the Southern United States displays a wide variety of mild climates and pleasant terrain. Snowfall is generally light to nonexistent, though rainy seasons that sometimes see hurricanes occur in states bordering the Gulf of Mexico.

Geographically, the South is also extraordinarily diverse, from the swampy bayous of Louisiana to the scenic beaches and vacation areas in Florida. The Cumberland Mountains stretch across the northernmost states, with deciduous forests and rolling hills in the surrounding areas. Flowering trees and red clay earth, palm trees and marshlands—the South features beautiful and varied landscapes.

Soul food and home cooking: that’s what Southern cuisine is all about. Fried chicken, collard greens, barbecued pork, cornbread, and pecan pie might compose the iconic Southern meal. However, as you venture throughout its regions, you can taste the effects of the groups that settled those areas years ago. For example, Cuban and other Caribbean and Latin American influences are strong in southern Florida, as is the spicy French Creole/Cajun cuisine famous in Louisiana. Produce harvested in the South is commonly used in Southern cooking as well: pecans, peanuts, rice, catfish, crawfish, shrimp, pork, beans, and okra, to name a small fraction.

The Northeast may be a relatively small region, when compared to the other quadrants of the United States, but it’s jam-packed with culture, people, and a way of life all its own—and even more varied still as you travel between the states. From quaint, historic New England villages to what’s known as the most exciting city on the planet, the Northeast is full of great places to call home. And with a dense collection of universities and a huge student population, it might be the perfect place for you too.

The Northeast experiences four distinct seasons, with mild springs and autumns, warm summers, and occasionally severe winters with ample snowfall. New England in particular is known for its unpredictable weather, and students should bring suitable layering clothing and outerwear. The Northeast is also an area replete with lakes and rivers, mountain ranges, and ample coastline. Geographic areas range from pastoral farmlands to quiet suburbs to bustling urban centers such as Boston, Philadelphia, and the incomparable New York City.

From the original Native inhabitants to the first U.S. settlers to waves of immigrants in the late 19th century and early 20th century, the Northeast is a true melting pot of cultural influences, and these peoples create distinctly Northeastern fare, relying on the many foods native to the area: apples, corn, strawberries, beans, maple syrup, lobster, clams, cod fish, and much more. Seafood in general is popular, as many of the states in the Northeast border the Atlantic Ocean. With further immigration in recent years, you can also find ample ethnic dining options through the Northeast and practically any ethnic food imaginable in the most populous areas.