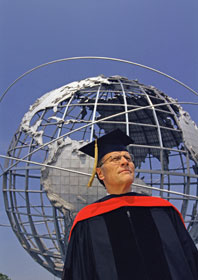 I like to consider myself something of a higher education expert. Between a college internship in the field and my current position, it feels like roughly 600% of my career experience has been in the higher education sphere. In typical form, I was recently babbling on about the latest higher ed news with a friend—specifically, this past summer’s developments at the University of Virginia regarding the firing of the school’s president. There were so many key players in the situation that even I, a self-proclaimed college pro, managed to confuse all the people and positions being thrown around in the news. If I’m baffled by these positions, then there must be a population out there that feels the same way, right?

I took it upon myself to research some of these positions that you’ll hear on campus and in the news. Here’s a guide to help you keep track of the big men and women on campus that keep institutions across the country running smoothly:

This is the most obvious position, but the president is, in the simplest terms, the leader of the entire institution. The president of a college is the equivalent to the CEO of a company, so his/her role is to lead the overall strategic planning for and sustained performance of an institution. In other countries, this position is called the chancellor, but sometimes when there are several campuses within a university system, the leader of each campus is called the chancellor, who reports to a president of the overall university. (This takes place at the University of California, for example—UC Berekely’s chancellor is Robert J. Birgeneau and UC Riverside’s chancellor is Timothy P. White.)

A provost is, in essence, the vice president of a university. Most often, this position is considered to be the senior academic administrator in charge of curricular and research tasks. The provost may sometimes act as president during a vacancy, such as the time between a president leaving and a new one being hired. Almost always, provosts are selected from tenured faculty (see “faculty” below). Provost is similar to chancellor in that it may refer to the title of the leader at a particular branch campus within a university system. Some other titles used for this same position include chief academic officer or vice president for academic affairs. Titles such as assistant provost, associate provost, vice provost, or deputy provost will report to and work directly with this position.

The dean is an administrator who leads a particular academic unit, such as a department or college within a university. (For example, Catherine Seraphin, Dean of the College of Communications at Penn State University. Hey, a girl can dream, right?) Deans of individual colleges often report to either the president or the provost of a school. The role of the dean often includes leading the faculty of the particular department/school, fundraising, setting academic policies, etc. It isn’t rare for a dean to also be a professor in the department. In addition, there is often a dean of students or dean of faculty, who serves as the “voice” representing those parties in day-to-day administration.

Okay, so these guys and gals are a little confusing. A board of trustees is a corporate body that has complete responsibility for the government and welfare of a university. The board is made up of advisors who, in almost all cases, don’t hold any positions at the school itself (this, of course, doesn’t include key constituents such as the university president, and occasionally deans and faculty). The board will often include well-known alumni and state politicians, especially for state schools. This group—which ranges in size depending on school population, public or private affiliation, etc.—does such duties as selecting the president, determining major goals of the university, approving policies and procedures, reviewing the budget, and other related tasks.

As most know, faculty refers to the body of professors that teaches courses to students. There are several different levels of faculty members, though.

The most awesome group on campus.