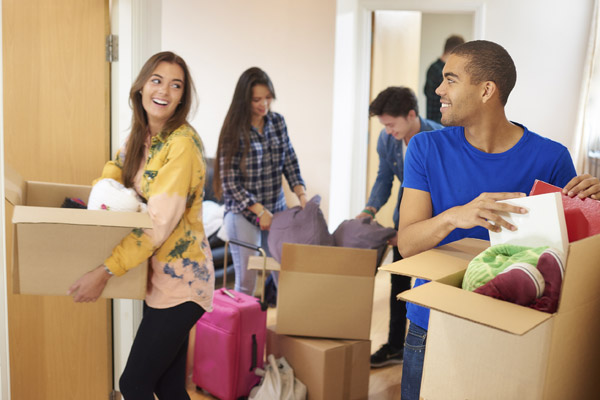 So...what is it like sharing a dorm with members of the opposite sex?

Moving into a college dorm is a big transition, even if you’re used to sharing your living space. And dorms can really throw you for a loop when they’re co-ed.

Colleges in the United States started having co-ed residence halls back in the 1970s, and today, about 90% of all schools have at least one co-ed dorm building. (Keep in mind “co-ed” can mean a lot of different things, but the gist is that students of both sexes live under the same roof. More on that in a second…)

Also, though most shared dorm rooms are still single sex, more than 150 colleges, including Brown University, Stanford University, The University of Pennsylvania, Oberlin College, Clark University, and the California Institute of Technology, now allow some or all students to share a room with anyone they choose—and we mean anyone. These co-ed dorm rooms are typically called “gender-neutral housing.”

So, what is living in a co-ed dorm—or a co-ed room—really like?

Co-ed dorms (meaning the buildings, not the individual rooms) may still separate genders, often by floors or “wings.” But many colleges just mix things up, with female and male roommates living next door or across the hall from each other. In any case, there’s a good chance you’ll run into the opposite sex while you’re in your jammies—and possibly while you’re in the public restrooms.

On the subject of bathrooms, which are often students’ biggest concern about co-ed living: co-ed dorm bathroom policies also vary, so it’s important to check with your college to see what’s up. For example, UC Riverside’s co-ed dorms have gender-specific restrooms and showers, but at MIT, the bathrooms are co-ed too. In co-ed bathrooms, the showers have curtains and bathroom stalls have doors (just like in single-sex bathrooms), but you’ll still find yourself in close proximity to someone of the opposite sex. And, yes, you both might be naked. But unless one of you chooses to strut around in your birthday suit, you’re not going to see anyone’s nakedness. And as for simply sharing bathroom space with the opposite sex? “Nobody cares.”

Beyond bathrooms, co-ed dorms are pretty much like any other dorms, except, you know, co-ed. There are often communal spaces to hang out, cook, and/or study. RAs plan events. You’ll go through some sort of security checkpoint to get in. And you’ll probably need to sign in any guests if you have them (though co-ed dorms may be more lax about guests of the opposite sex and curfews).

Many students say it’s like living with brothers and sisters. Sure, a little awkward at first, but you get used to it. Hanging out with your dorm friends (no matter their gender) is tons of fun, but the day-to-day living is actually kind of boring. Yup, everybody showers. Everybody looks a little worn out in the mornings. And everybody poops.

I lived in a co-ed dorm freshman year of college, and honestly, it wasn’t a big deal. I shared a cozy little room with another female student, and we had two boys living next door. We didn’t even see them that often. Some people got dressed in the communal bathroom after they showered, and some just walked to and from their room in robes or towels. Either way is a little nerve-wracking at first, but, again, you get used to it.

Plenty of students simply feel more at ease in single-sex dorms. Some students hold religious or moral beliefs about men and women living together. (And some colleges, often those affiliated with a religion, take a stance against co-ed dorms anyway.) It’s all relative, and that’s why most colleges offer a variety of housing options. At the end of the day, you’re going to find friendships and parties, study spaces and places to chill, in any dorm, co-ed or not.

But what about all the sex?!?!

If you’re heterosexual, co-ed dorms might make it slightly easier to accommodate sexy time. But that doesn’t mean your roommate(s) will magically disappear when you have a “special friend” visiting. Or that you’ll be living next door to someone you’re attracted to. Or that they’ll be attracted to you. Basically, dating is hard no matter where you live, and co-ed dorms are not depraved spontaneous hookup dens.*

So, now that you know a little bit more about co-ed dorm buildings, what about co-ed dorm rooms, aka gender-neutral housing? Well, despite your mom’s hand wringing, it’s not just couples shackin’ up.

Advocates of gender-neutral housing say it’s about making sure every student has a comfortable, inclusive on-campus living experience. And students say a good roommate is a good roommate, regardless of their gender. According to a 2010 article from the LA Times, colleges report that most co-ed roommates aren’t in a relationship; they’re just compatible, platonic roommates.

Gender-neutral and co-ed rooms can also be important to members of the LGBTQ community. Some gay students feel more comfortable rooming with someone of the opposite sex. And students who identify as trans- or non-gender-binary appreciate dorms where they feel welcome as a person.

However, if you’re not interested in sharing a mini fridge with someone of the opposite sex, you don't have to. Even at colleges offering gender-neutral housing, many (if not most) students still choose to room with members of the same sex. In the same LA Times article, Jeffrey Chang, cofounder of the National Student Genderblind Campaign to reform student housing, estimates that only 1%–3% of students choose a roommate of the opposite sex when given the chance. The great thing about gender-neutral housing is that it’s just that: neutral. So you can live with whomever you feel the most comfortable.

But what about all the sex?!?!

Sure, there might be some co-ed roommates who hook up, just like there may be same-sex roommates who hook up.* It would be statistically unlikely for it not to happen at least once (okay, probably a couple times). But, again, most college students aren’t looking for a built-in hookup partner. They just want a good roommate and a living situation that feels comfortable.

As for roommates who actually are in a relationship? A handful of colleges do offer designated couples housing, usually for students who are legally married. Beyond that, if a couple lives in a standard gender-neutral dorm room, the relationship is their business (though resident assistants are usually pretty prepared for dealing with breakups and room reassignments). And we doubt the college will provide anything but the standard extra-long twin beds—two of them.

At the end of the day, you should try to think about what college living situation will make you the most comfortable. So whatever works best for you—co-ed or single-sex dorms, shared or gender-specific bathrooms, etc.—your college should be able to provide it.

* And if you are thinking about hooking up with someone you live with or near, try to remember that can be a recipe for awkwardness—way more awkward than scuttling down the hallway in a towel and flip-flops.