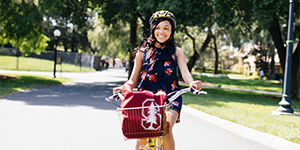 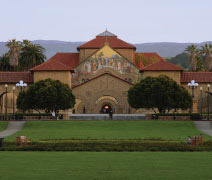 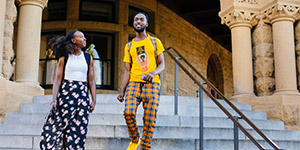 Stanford is one of the world’s leading teaching and research universities. It is known for its innovative academics, rich diversity, entrepreneurial character, and relationship to Silicon Valley.

With areas of excellence ranging from the humanities to social sciences to engineering, Stanford is dedicated to finding solutions to big challenges and preparing students for leadership in a complex world.

Academic freedom
A Stanford undergraduate education is rigorous and defined by the inherent freedom and flexibility enjoyed by students as they delve into the subjects about which they are most passionate—forging meaningful relationships with their talented peers and lauded faculty along the way.

Grounded in the liberal arts, the Stanford curriculum is designed to achieve balance between depth of knowledge acquired through specialization and breadth of knowledge gained through exploration. It permits each student to plan an individual program of study that takes personal educational goals, prior experience, and future aims into account. And it’s an education that broadens the student’s understanding and awareness in each of the major areas of human experience, significantly deepens understanding, and prepares him or her for a lifetime of continual learning.

Many students supplement this already robust education through high-level research, even as undergraduates. In fact, Stanford has more funding available for undergraduate research—more than $5.6 million per year—than most colleges or universities in the nation. Students usually write proposals (with advice from faculty sponsors) to have their projects funded, which can cover expenses such as travel andequipment and allows students todevote their full attention to their research.

Diversity
Stanford students and faculty cometo campus from a vast range of backgrounds and all over the world. Undergraduates represent 50 states and 76 countries; approximately 18% are the first in their family to attend college, and about 11% are international students. But diversity at Stanford means more than geographic, racial, or ethnic differences. The Stanford community embraces a wide array of socioeconomic, religious, cultural, and educational experiences.

From the vibrant residential environment to intellectually charged classrooms to every corner of campus where students engage, diversity is celebrated. The Stanford community values a wide range of opinions, cultures, communities, perspectives, and xperiences, all of which challenge a student’s own beliefs, intellectual passions, opinions, and understanding of the world. Members of the Stanford community believe the best education can develop only in a community that actively affirms both the differences among its members and the numerous points of connection.

Entrepreneurial spirit
Just down the road from campus is the global epicenter of high technology: Silicon Valley. From HP and Google to Netflix and Pandora, many of the most innovative enterprises in modern history were sparked by Stanford faculty, alumni, and students. Stanford alumni and faculty have created 39,900 companies since the 1930s, which, if gathered collectively into an independent nation, would constitute the world’s 10th-largest economy.

However, entrepreneurism at Stanford extends far beyond founding companies; Stanford’s entrepreneurial spirit is homegrown, organic, and pervasive. Students, faculty, and alumni generate transformative ideas and set them in motion.

One such idea incubator is the Haas Center for Public Service, which connects academic study with public service to strengthen communities and develop effective public leaders. Recognized as a national model for public service education, the Center encourages Stanford students to impact their community through service, scholarship, and community partnerships. More than a third of undergraduates participate in one or more Haas Center programs each year, from working with organic farmers through the on-campus Stanford Community Farm to helping children develop language and literacy skills in East Palo Alto’s public schools.

Another is the experience in learning known as “CS+X”—a joint major integrating Computer Science with the humanities launched in fall 2014. Its goal is to give Stanford students the chance to become both a new type of engineer and a new type of humanist.

Residential campus
Located in California’s intellectually dynamic and culturally diverse Bay Area, Stanford is a thriving residential campus and community sitting on 8,180 pastoral acres, once a horse farm belonging to Jane and Leland Stanford and still fondly referred to as “the Farm.” Today, 60% of that land remains open space, including some 43,000 trees, three lakes, and rolling foothills that overlook the inner campus.

On the campus itself, designed by famed landscape architect Frederick Law Olmsted and bustling withbicycles, skateboards, rollerblades, motor scooters, and golf carts, you will find California Mission–inspiredbuildings of local sandstone with iconic red-tiled roofs and a cloistered quadrangle with Memorial Church as its focus.

More than 12,500 students live onthese sprawling yet intimate grounds, surrounded by extraordinary campus resources and facilities. And with San Francisco only 35 miles to the north, San Jose 20 miles south, and Palo Alto right next door, students enjoy a region rich not only in opportunity but also in entertainment and other diversions.

Vibrant student life
With its culture of creativity and innovation, Stanford fosters an arts scenealive with both professional and student voices, from film archives to orchestral concerts to visiting Broadway legends—not to mention a collection of visual arts pieces that spans 4,000 years.

For the student-athlete driven to excellence, Stanford fields 36 varsity teams and 31 club sports. Stanford has won the Directors’ Cup, honoring the most successful program in NCAA Division I sports, for the last 23 years. And for 42 years in a row, Stanford has won at least one national championship—the longest streak in the nation.

In addition to the offerings on campus, the Bing Overseas Studies Program (BOSP) is considered an integral part of Stanford’s curriculum. Approximately 51% of each graduating class studies abroad during their undergraduate career at Stanford, and BOSP operates a variety of programs—including international internships—at locales such as Australia, Berlin, Cape Town, Florence, Istanbul, Kyoto, Paris, and Santiago.

Financial aid
Stanford is committed to a need-blind admission policy for US citizens and eligible non-citizens and to providing a comprehensive financial aid program for all admitted students demonstrating need. Approximately 70% of our students receive some form of aid to attend Stanford (financialaid.stanford.edu).