How to Protect Yourself from Cyberbullying in College 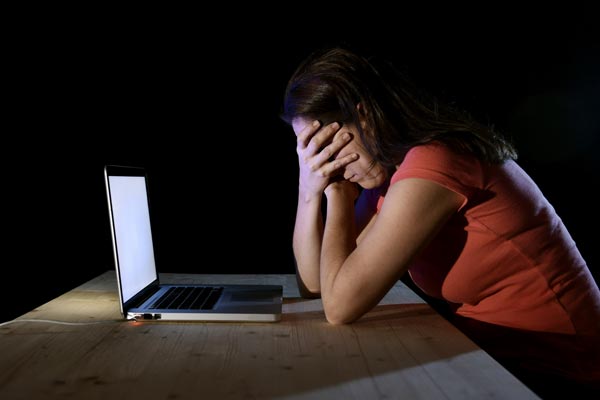 From snarky comments to downright vicious trolling, the Internet can be a mean place for college students. Worse, cyberbullying seems to be on the rise on campus. So how do you deal with it—and protect yourself?

It wasn’t too long ago that a group of male students at a New England college created a private Facebook group where they gossiped, insulted, and spread rumors about the women who lived across the hall.

The environment on this residence hall floor, usually bubbly with chatter in the common room and group dinners in the dining hall, suddenly shifted when one of the guys revealed the online discussions. The news spread quickly. The young women demanded to see what was written and were horrified at the things said about them and their roommates.

Some of the women completely stopped socializing with the rest of their residence hall, too embarrassed and shocked to go back to the way things were. Others spoke up, hurt by the people they lived with and trusted as their friends. The incident divided the floor and left students feeling vulnerable in the place they were supposed to call home for the rest of the school year.

Today, this type of behavior is on everyone’s radar and has a name: cyberbullying. It occurs when someone is targeted or victimized online through instant messaging or texting, social network groups, or forums.

Though you'd think students would become a little more mature and kind as they grow up, unfortunately, young adults continue to target and harass one another in college—sometimes even worse than in high school. And a campus once full of friendly faces can turn into a minefield for students if they’re the target of bullying.

Bullying, both on and offline, leaves students feeling anxious and exposed. Instead of focusing on their college classes, grades, and new opportunities, victims of bullying might stay home or skip class to avoid running into their harasser. They might experience isolation, depression, and anxiety as a result of being targeted or humiliated by a peer. In extreme instances, students have been driven to violent behavior or even suicide from being bullied.

In September of 2010, a now infamous incident awakened the country to the seriousness of college cyberbullying. After an extreme invasion of privacy and being bullied online by his roommate, Tyler Clementi, a freshman at Rutgers, The State University of New Jersey, committed suicide. Following the incident, the student body united in a campus-wide Civility Project. Clementi's family also started the Tyler Clementi Foundation to prevent bullying in 2011.

Many college students aren’t aware of how frequently bullying occurs after high school—and they don’t expect it to happen to them. According to the Graduate School of Education at the University of Buffalo, 22% of college undergraduates say they have been a victim of cyberbullying; 38% say they know of someone who has been cyberbullied.

According to researchers, students might not even realize they have been bullied, or that they have been bullies themselves, until they are directly asked about it. “Sometimes conversations are insulting and casual to be funny, but if you keep repeating those insults and you aren’t reacting to the emotional response of your victim, you are bullying them,” says Dr. Alexis Kennedy, an associate professor in the Department of Criminal Justice at the University of Nevada, Las Vegas, who also studies college cyberbullying.

Even though it's a common method of harassment, cyberbullying is generally perceived differently than offline behavior; the online threats are more often dismissed because they don’t seem as “real.” The separation of a screen prevents the harasser from properly judging the consequences of their actions, or how they might affect someone else. “There is a perceived anonymity,” says Dr. Kennedy. “They say things they would never say face-to-face because they can’t see the other person’s reaction.”

According to Dr. Kennedy, students don’t think about they way they treat each other because they don’t see their peers as offenders, abusers, or harassers. “They don’t want to hear about it because they think it doesn’t apply to them, and then when something does happen they don’t know where to turn,” she says.

Remember there are resources if you are being cyberbullied. Campus counselors, friends, and family can help you feel safe again if someone has targeted you. “What I want students to understand the most is that they are never alone in dealing with this,” says Dr. Englander, who also published research on college cyberbullying in 2010. “There are many resources and people they can turn to today for support and help with these situations.”

“It’s very hard for people to not defend themselves, and they have to basically ‘sit on their hands’ and not let the other person get to them,” says J.A. Hitchcock, President of Working to Halt Online Abuse (WHOA). If a cyberbullying situation does arise and you are targeted, don’t retaliate, she says. “It’s a natural reaction, and that’s when things can get out of control. The bully/harasser knows they’re getting to you and they’ll continue to escalate. It’s almost as though it boosts their ego.”

How to protect yourself against cyberbullying

A good way to prevent cyberbullying is to be vigilant about privacy and take steps to protect yourself. Think of social media networks and apps as a wall in a bathroom stall that people scrawl things all over. Once you post personal details of your life online, they become material for anyone looking to target you. “Sharing any information about yourself online turns that information into public property,” says Dr. Englander. She recommends keeping even your relationship status to yourself.

Make sure you know the privacy settings for the apps and sites you use too; the default settings aren’t necessarily the most secure. Finally, try searching for yourself online to see what pops up. If you don’t like what you see, you might be able to do something about it. Set up a free Google Alert or Talkwalker Alert for your name (including nicknames) as a first line of defense.

Keep in mind this isn't about taking yourself offline or even censoring yourself—it's about being safe and smart. Specialists compare using social media to driving a car: it’s convenient and practical, but there is a risk every time you get behind the wheel that you will have an accident. All you can do is make sure you’re doing what you can to protect yourself, just in case.

How to combat cyberbullying in your community

Here are a few simple ways you can help prevent cyberbullying:

Remember: you can be the change you wish to see in the world by conducting yourself with kindness and civility online. And you have the power to stand up to bullies if you see someone else being abused. Be the kind of ally and friend you'd want on your side. As O’Brien says, “We as a community can only prevent bullies from bullying.”