If I Could Do the College Search All Over Again 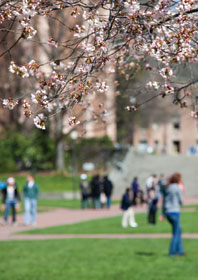 I'm in college now, happily sitting in my dorm room, attending classes, and socializing at the college of my choice. Yet, thinking back on my high school career, there are a few things I realize now I could have done back then that would have given me a leg up in college.

The first thing I would have done differently would be to start the whole process earlier. I began seriously looking at colleges when school started my senior year in early August. The Early Decision and Early Action deadlines were less than two months away at that time, and I admit I was really not ready for them. It was not that I was unable to meet the deadlines—about two months was an adequate amount of time for me to get my recommendations and write my essays—it’s just that I realize now that I didn’t really have a chance to consider all of the colleges that might’ve been interesting to me.

I assumed that I wanted a small tech school or a small liberal arts college, and I began narrowing my choices down from there. But I only considered a few of the absolute top-tier universities, without considering which one was right for my interests. I am interested in creative writing and computer programming, but the colleges that I was looking at didn’t focus necessarily on those two areas. I think that with some phone calls to a few colleges, and with a little more consideration of what I wanted to study and what schools would best suit me, I would have provided myself with a better platter of schools to choose from.

In the college application process itself, I was generally satisfied with how things went for me, but there are two major things that I would do differently. First, I would have schmoozed with my counselor a lot more. When the time came for me to request a guidance counselor recommendation, I realized that I didn’t know my counselor at all. If I could do it again, I would have gone in to speak with her monthly throughout my junior year for random, insignificant things—for example, I would have asked her if she knew where a scholarship was that I already knew how to find. The point would be not to inconvenience her or myself, but to provide me with an opportunity to chat with her. I didn’t really see the point then, but I did as soon as I realized that counselor recommendations are required for some applications. Make friends with your guidance counselor—it pays off big time.

I got waitlisted at a couple of colleges, and, since I received acceptance letters from other colleges at the same time, I became disinterested in pursuing the other colleges. If I could do that over again, I would have aggressively followed up on the waitlist colleges for sure. I think that I really narrowed my opportunities by letting the waitlisted colleges slide.

Finally, I would have appealed my financial aid letter. It’s not that I think it was exceedingly unfair; it’s just that, as I later learned, colleges hold out a certain amount of financial aid funds from their general consideration pool just in case there are late applicants or something direly effects a student’s financial situation so they still have funds to give that person. However, this doesn’t happen that often, at least not in proportion to the amount of funds they set aside for it. This money usually just sits there, unless someone asks for it. If I appealed my financial aid decision, making proper mention of other scholarships that had been offered to me, I believe that I could have easily gotten more money from my college.

Hopefully you heed my advice well and learn from my errors. Good luck with your application process.