Why I Chose a State School Over the Ivy League 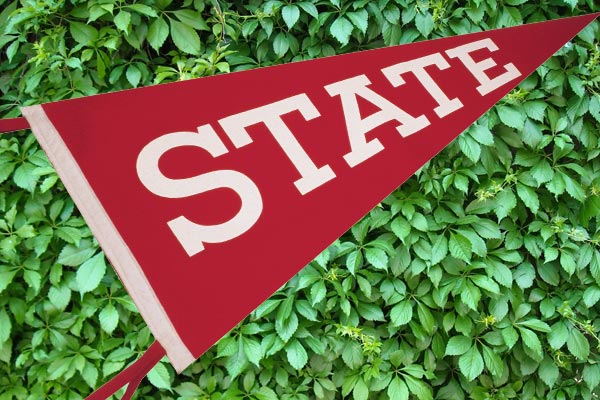 I have always been an extreme planner; it is one of those nasty, intrinsic, type-A personality traits that, no matter how hard I try to eradicate, does not seem to fade away. No surprise, then, that my first college plans emerged of my own volition during the fifth grade.

At 10 years old I saw my future path headed toward Yale and then to law school and eventually the presidency. At 11, Harvard replaced Yale as my school du jour and this pattern continued quite unobstructed for the next five years. I read up on colleges, scanned U.S.News & World Report’s college reviews, took the “right” courses, became the stereotypical “well-rounded” student, and told myself I would not settle for less than the most private, top-notch university in the United States. I swore up and down that Ohio had nothing to offer me and I snubbed the notion of anything that did not resemble a small, private college.

I was not alone in thinking that this was where my future lay.

In my competitive high school, it was relatively common knowledge that my grades and extracurriculars were strong and others assumed, as did I, that I would apply to at least one premier private university. As it turned out, my application stack was relatively short and none of the colleges were private. All were state schools and most were large: The University of Wisconsin at Madison, The University of Illinois at Urbana-Champaign, Indiana University at Bloomington, Miami University of Ohio, and The Ohio State University at Columbus. I never could have predicted that, in direct contrast to all my well-laid plans, I would find myself as a future Buckeye, with enrollment forms filled and admission fees paid to The Ohio State University.

“Why are you going to Ohio State?” was a question I heard too frequently for my own liking during the latter half of my senior year. It is a bizarre experience to find others so quick to express their views of your future. However, as in any decision, there were many well thought out reasons for my choice, all of which boiled down to three key points: money, opportunities, and the ever-ambiguous “gut feeling.”

The most tangible reason for my decision was money. As the majority of college seniors know, elite private institutions carry a hefty price tag; estimated yearly costs often total around $40,000. At the beginning of my senior year, my parents informed me that there was no special account marked “Annie’s college fund.” While they did not demand it, they urged me to look at colleges where I was competitive for large scholarships. Merit-based aid was my only hope, and most private universities generally dole out need-based financial aid, not merit-based. As a public institution, Ohio State’s in-state estimated yearly costs of $13,000–$14,000 are nearly one-third those of many private universities.

By November of my senior year, it was apparent that these costs would be reduced to virtually nothing once my scholarships were awarded. As a National Merit Semi-Finalist, I was eligible for full in-state tuition and $4,500 a year for four years at Ohio State if, as a Finalist, I listed OSU as my first choice. In addition to this very nice university-sponsored aid package, Ohio Board of Regents offered me slightly over $2,000 a year for four years if I chose to attend an Ohio university. All of this combined with some smaller scholarships meant that I was looking at four years of completely covered tuition, room, and board—with extras. The knowledge that I would never feel the financial burden of college and would be able to afford travel, clothes, entertainment, and other frivolities was one of the main attractions of OSU, and the primary factor that kept me from applying to any Ivy League school.

The second reason that I chose to attend Ohio State was the sheer number of activities in which I could become involved, majors I could study, and people I could meet. As one of the largest universities in the nation, OSU offered me exactly what I was looking for through its Honors Program. As an Honors student, I could take special Honors sections of courses if I wanted a smaller, more individualized, and more demanding setting. The Honors Program provided me with the attention and academic programming I wanted, accompanied by the resources and opportunities that come with a campus of nearly 36,000 undergraduates (and a total student body of nearly 50,000). While OSU offered me great academics and over 170 majors, it also offered me a wide array of extracurricular opportunities. In addition to its over 500 student organizations, OSU also had one of the largest intramural sports programs in the nation, offering its students everything from intramural flag football to underwater scuba hockey. And, if this was not enough opportunity, Ohio State is located in the middle of Columbus, the capital city of Ohio, meaning that there are many social, cultural, educational, and work-related opportunities to OSU students through the city resources.

Lastly, and most importantly, Ohio State appealed to me because of the way I felt after visiting campus and talking to students, faculty, and administrators. This is what I refer to as the “gut feeling.” Essentially, it boils down to how comfortable you feel on campus. While the attentiveness of OSU’s administration helped me feel at ease, there was nothing more exciting than visiting a school and seeing how enthusiastic the students were about their university. I visited about 10 schools over the whole search process and only two were memorable for their students’ enthusiasm. Ohio State, however, was by far the more notable of the two. This was incredibly important because I was meeting students who had been similar to myself in high school and, not only were they succeeding tremendously at Ohio State, they were excited to talk to me about their university. The most common trait that I have found among students at Ohio State is their strong love for the school in its entirety; this enthusiasm about the university is contagious. By the time I was ready to make my decision, it was impossible to ignore the high praises I had continuously heard about Ohio State.

Having said all this, was my decision really that easy? Well, in a word, no. In fact, I fretted and, ridiculous as it seems, even cried about it for a month or so. Although I had applied to five schools, I was constantly debating the merits of a sixth application to Princeton. In the end, I threw out my semi-completed Princeton app, signed my intent to OSU, and mentally prepared myself to be a future Buckeye. This was not easy, as long-lived dreams die hard. However, it was one of the better choices I have made, saving both time and angst. Princeton was too expensive, did not afford me the opportunity to double major, and, frankly, I did not want to face rejection (ultimate death to dreams) or acceptance, as either way I would not attend.

Looking back on all of this as a third-year Buckeye it is laughable how long it took me to come to these conclusions. Had I known as a senior in high school how happy I would be at Ohio State, the fact that it was not the prestigious private school of my blueprint for life would not have mattered. The money I have saved through scholarships has helped me finance a summer study abroad program in Mexico, multiple winter and spring break vacations, and a summer backpacking trip through Europe. The opportunities have allowed me to pursue degrees in Sociology and Public Policy (self-designed), a Spanish minor, research, internships, political activism, and leadership, service, and social activities, all while managing to get my first ever bloody lip in intramural flag football. And, though all of this is great, it wouldn’t be complete without the never-ending Buckeye pride that flows throughout campus. This pride stems from success in academics, athletics, community service, and volunteerism and manifests itself in knowing that the proper response to “O-H!” is screaming “I-O!”, in pausing to hear the bells in Orton Hall ring, and in singing the words to “Carmen, Ohio” in Ohio Stadium while still trembling from the final second of the 2002 OSU/Michigan game. So when the rare person questions my college choice, I have two words for them: GO BUCKS!